Thank you Martin for visiting us again, it is always a great pleasure to welcome you, even though you have been coming to the vineyard for years and know all our wines by heart ! It is such an honor to read the article you wrote about us !

“It is always a great pleasure to visit the vineyard of Terre Vieille on the wooded plateau of the Pécharmant. The house and gardens are charming, the ancient pigeon towers are magnificent and if you don’t see the sign warning drivers that the chickens roam free, large and painted wooden silhouettes of cockerels will remind you. The tasting room contains an impressive collection of prehistoric stone and flint tools, hand axes, blades and scrapers all found on the property. They have started an interesting new sideline in picnic lunches. For thirty euros you get a large wooden box with bottles of water, bread, pâtés, cheeses, fruit and salad, a feast for two, along with a glass of
wine per head. There are tables and chairs scattered among the trees and they serve until they run out of fresh bread. There is also a great deal of more modern history here. The eight hectares of wine terrain around the house are known as Grateloup, an ancient term for a place where wolves liked to frolic. It was the home of the somewhat abstruse philosopher Maine de Biran, whose thought progressed from Locke’s focus on the senses and reason to theosophical mysticism and ended up back in the bosom of the Catholic Church. As a young man he was a member of the Royal Guard in 1789, when King Louis XVI was hauled back from Versailles after the Revolution. He became a politician, was expelled from the Council of 500 for his royalist sympathies but took his revenge in 1813 when he helped launch the constitutional coup that eventually toppled Napoleon. After the restoration of the monarchy in 1815, he became Treasurer to the Chamber of Deputies.
Terre Vieille has always made a first-rate Pécharmant but I was interested in another wine they make, called X Vin, the X being the Roman numeral for Dix, and is thus prononced divin. Very cute. But it is an excellent wine and an IGP rather than made under the stricter rules of the Appellation Contrôlée system. It is lighter, for easier and casual drinking, but a serious wine nonetheless. They make a lovely crisp and intriguing rosé, at 9.50 euros a bottle and a very agreeable red for 10.40.
They offer three versions of Pécharmant. The first, one-third each of Merlot, Cabernet France and Cabernet Sauvignon and vinified without time in a barrel is called Chevalier, at 12 euros a bottle. The Château Terre Vieille spends 20 months in the barrel, and the 2018 is 14 euros a bottle, the 2015 is 18 euros. I thought the 2018, only just going on sale, is excellent, rich and velvety but with that steely
backbone that is the hallmark of a good Pécharmant, drawing its character for the flinty soil and that unique, deep layer of mineral-rich clay known as tran. They alse offer a very special wine, made only in excellent years, called l’Ambroisie and the 2015 costs 41 euros. There is also a good value tasting box of six bottles for 88 euros. It contains one of the XVin, two of the Chevalier and a Pécharmant from each of the years from 2017 and 2018. I was also interested to meet Pierre Monteil, who now runs the vineyard. He is the son of Gérôme Monteil. founder of Terre Vieille, who with his wife Dolores began making wine here thirty years ago while raising their family.
Pierre-is a slim, energetic man, who knows every inch of the Grateloup section and of their other seven hectares close to the village of Saint-Sauveur. He is experimenting cautiously with new ideas planting some Chenin grapes and making one barrel of wine without sulfites, knowing that climate change will force some changes in the way his wines are made. “Merlot used to be the easy grape to grow, but that’s changing with the climate and it will need more care, and Cabernet will be the easy grape,” he says.
Unlike most of the new generation of winemakers Pierre had not gone to one of the specialised wine high schools like LaBrie, just south of Monbazillac, nor to a university with special wine schools like Bordeaux. He studied law and commerce instead, and worked for some years for a Champagne house in northern France and also spent a year in California working in Napa Valley at the well-known vineyard
of Paul Hobbs. Pierre began taking over from his father at Terre Vieille some five years ago, just as the grim years of successive frosts
and hailstorms began battering the region. Ironically, the same had happened to his father, whose first year of harvest in 1991
was wiped out by bad weather. The crop this year so far looks reasonable but the long sécheresse of a hot summer with little rain is worrying. «My father always told me that wine was not made in the chai, but in the terroir, and there are variations between heavier and lighter soils, and between those areas that get some shade,” Pierre told me. “The vines themselves are just part of an ecosystem that includes our soils, our hedges and woodlands and wildlife.” Pierre is interested in the way that some southern European and Georgian vineyards plant olive and other trees among the vines to offer some shade, a tradition that dates back to Roman times. And in this year of heatwaves, it was sobering to learn that some vineyards in the Aude, around Limoux and Carcassonne, have al- ready started to pick their grapes, almost unheard of in July. The times are indeed a changing.”

Martin Walker, author of the best-selling ‘*Bruno, chief of police’ novels, is a Grand Consul de la Vinée de Bergerac.
Formerly a journalist, he spent 25 years as foreign correspondent for The Guardian and then became editor-in-chief of United Press International. He and his wife Julia have had a home in the Périgord since 1999 and one of his great hobbies is visiting the vineyards of Bergerac. 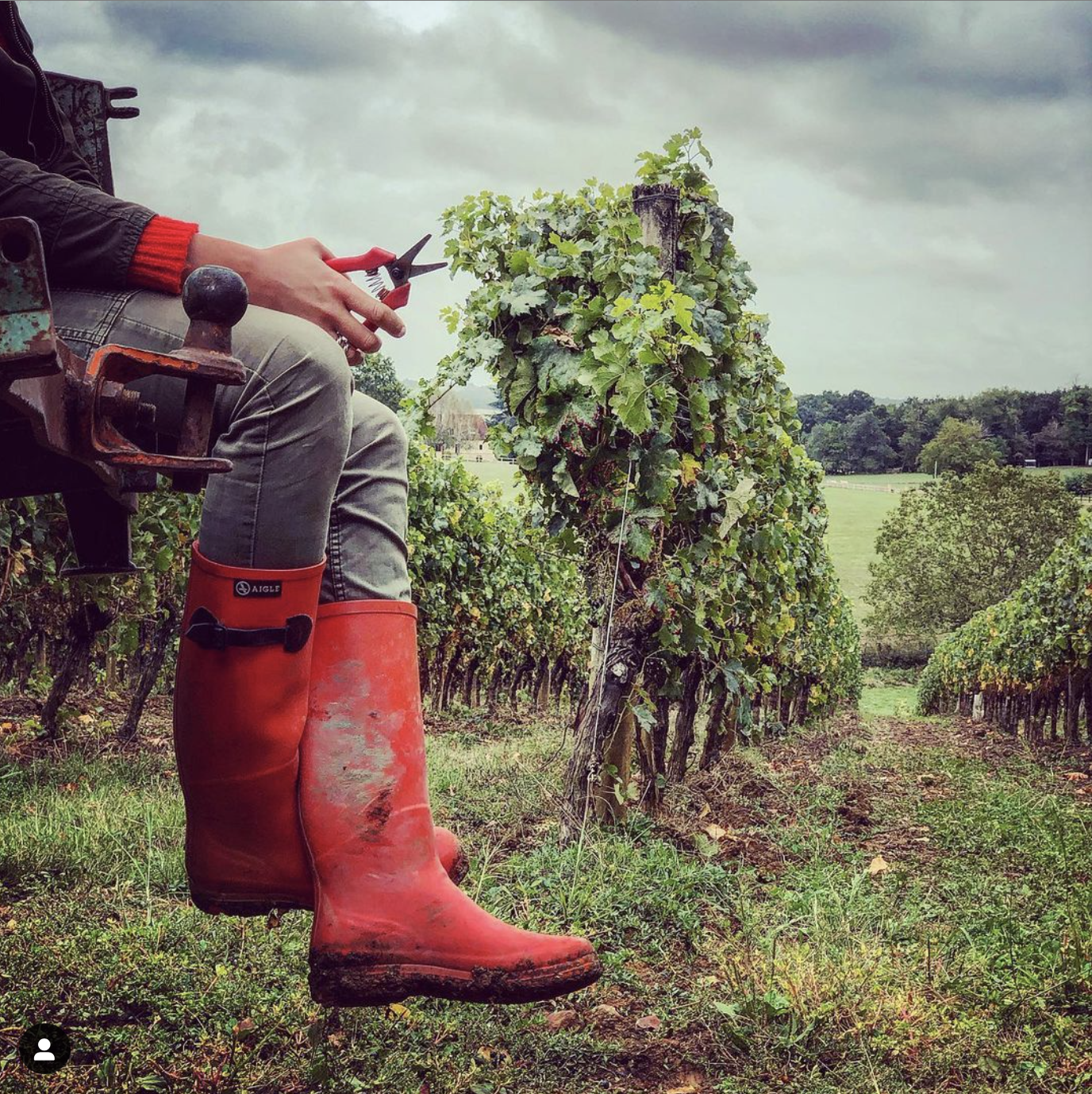